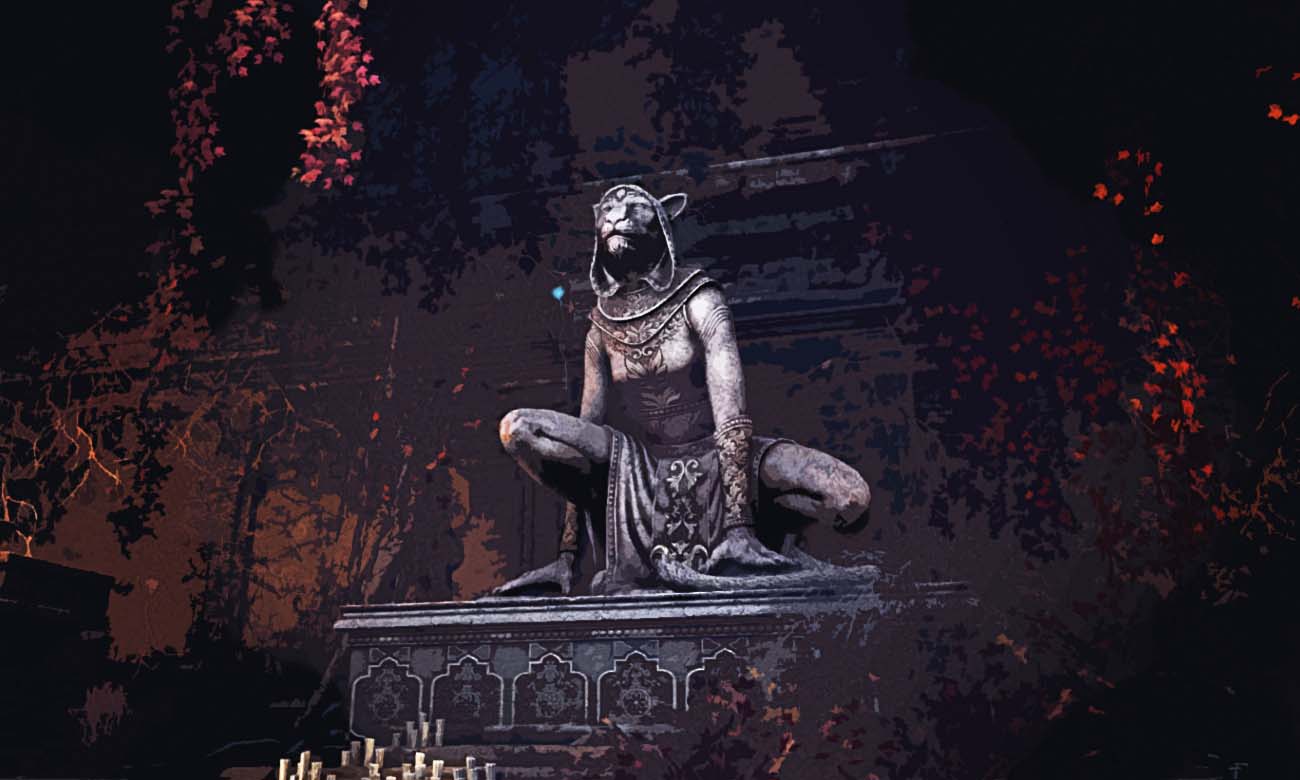 This walkthrough will mainly focus on doing Moongrave Fane on Veteran difficulty.

If you are on normal difficulty, it will all be the same only a lot more forgiving. If you are doing it on normal, pay attention to the mechanics as it will help you a lot when going for veteran mode!

Moongrave Fane is one of the hardest dungeons in the game and will require your undivided attention. Make sure you understand the mechanics and what you are supposed to do.

Moongrave Fane is part of the Scalebreaker DLC and was released along with Lair of Maarselok.

You will encounter these bright, yellow markings throughout the dungeon. They will serve slightly different purposes depending on where you are at but the interaction with them will remain the same.

To interact with a Sangiin Sacrifice, you need to synergize with the bright yellow marking, doing this will change its color to red and spawn an orb floating above it.

Warning: Synergizing with a yellow mark will consume 50% of your total health. Be careful!

In order to destroy the red orb, you need to perform a heavy attack on it, no other attacks will destroy the orb. Destroying the orb will trigger various mechanics throughout this dungeon, we will go into further detail in each section.

Throughout this dungeon you will encounter some big crates that you can push by hitting them with attacks. In some areas you will need to push them on top of switches to open doors in order to progress through the dungeon.

Throughout the dungeon you will encounter hovering shades called Hemonculous. They will have shields preventing you from damaging them, you can not burn through this shield.

The only way to make them vulnerable is to use a Sangiin Sacrifice, heavy attack the orb facing the Hemonculous’ in order to shoot the orb at them and break their shields (it will affect all nearby Hemonculous). After you’ve done this you will be able to stack them up and kill them.

The first boss in Moongrave Fane is not too tricky but introduces a few key points you will see throughout the rest of the dungeon.

The boss will enter a shielded state where it cannot take any damage, you can not break through this shield with attacks. You have to use the Sangiin Sacrifice in order to break the sheild, read more about Sangiin Sacrifice at the top of the page to understand what to do.

You will take damage equivalent to 50% if your health when you synergize with the yellow marking, make sure your health is up!

Once you heavy attack the red orb, it will fly at the boss and break his shielded state allowing you to continue damaging it.

Note: If left long enough the boss will disable its shield even without the aid of an orb. You will require a lot of healing doing it this way, but you will get an achievement (Bloodless Kill) if you never use a sacrifice through the fight.

The boss will send out little rock projectiles while he is shielded, break the shield quickly to avoid the group dying from these. The projectiles deal quite a bit of damage.

The boss will smash the ground repeatedly – everyone needs to block and may require some extra heals from the healer. Just wait it out, the boss will stop smashing after a little while.

The boss will perform a rockslide and thrust himself in a direction, you will get a red stripe on the ground indicating the direction, just make sure to stay out of it.

Everytime the boss enters a shielded state you will get adds spawning. The tank needs to make sure to taunt and chain pull these so that the group can easily deal with them using AOEs. Focus on the adds before you return to the boss.

The second boss in Moongrave Fane is a little trickier than the last. It can seem a little chaotic but we can do this once we understand the mechanics a little better.

There will be adds that run in from the sides, which will run immediately to a yellow ground marking and “synergize” with it to spawn a red orb. Don’t try to kill these adds, they have lots of health and will die as soon as they summon the red orb.

The boss will run over to a red orb and start casting a red ray at it. The only way to stop this is to heavy attack that orb before the boss is done casting.

If you don’t destroy the orb in time, everyone takes massive damage and you will wipe. It’s good practice to keep getting the orbs as soon as they spawn so you don’t have to worry about it.

The boss will get a shield, it will look like rectangular rocks rotating around him. At this point, the boss will start hitting everyone with a lot of damage. The boss will keep doing this until we burn through his shield with damage, we want MAX dps here! Make sure to save your Ultimates for this phase to burn through it faster.

You will progressively take more and more damage the longer the shield stays up, eventually everyone will wipe. Tank – make sure to taunt any adds in the room to alleviate damage on the damage dealers, they will not survive if they have adds on them.

The boss will summon his shield at the following health percentages:

The boss will at times transform into a pool of blood chasing a player, just make sure to kite it and avoid standing in it.

The third boss in Moongrave Fane is quite straightforward, but we will have tons of adds to deal with, so you will need a sturdy tank here.

The boss will start slamming the ground and volcanic eruptions will start sending fireballs at all players. The eruption will last for 20 seconds. And the boss will reflect all incoming damage back onto the group so HALT ALL damage at this stage.

There will be four geysers throwing out flames and the group will quickly die if we don’t do something about it. Heals will need to be flowing at this stage.

You can use the big crates to block the geysers, simply perform light attacks on the crates as you’ve done earlier in the dungeon to move them around. Try to cover some of the geysers with crates to reduce the incoming damage.

The eruptions will happen at the following boss health percentages:

OR the eruptions will happen every 30 seconds, whatever comes soonest. So there is no gain by slowing down DPS on this boss really.

Alternative strategy: If you have a powerful enough healer and you all stack properly, you can ignore the geysers and crates altogether. Instead, you will focus on the adds, make sure the group stacks hard and keep those heals coming! Remember, DON’T attack the boss! Your attacks will deflect back onto you.

During the eruption stage, we will have adds coming in from the sides. For every time the eruptions happen, you will get more adds. At the end of the fight, you will be swarming with adds.

The tank should focus all attention on reeling and taunting adds while the damage dealers move the crates to cover the geysers. The healer should focus on healing everyone at this point, there will be lots of incoming damage.

Use as much CC as possible and try to keep them clumped up so that AOE damage takes down most of them.

Save your Ultimates for the adds!

The fourth boss in Moongrave Fane consists of two bosses. This can be a very difficult fight and the tank needs a lot of sustain here, Grundwulf hits really hard.

The tank should be taunting Grundwulf, do NOT lose aggro on him at any point! He deals a ton of damage and will wipe the group in seconds if he is loose. Tank should also be taunting the demon (Sangiin’s Thirst) that Nisaazda summons.

You can use this to your advantage by only focusing on Nisaazda, she will cast Blood Ties bringing down Grundwulf’s health as a result.

There is an achievement for beating the fight without Nisaazda ever casting Blood Ties, if you want to do this, make sure each damage dealer focuses on each boss and keep your damage very leveled!

Nisaazda will start summoning a Sangiin Thirst (demon with wings). To stop her from summoning the demon, you must use the Sangiin Sacrifice and shoot the orb at her. If the demon spawns, the tank should grab it and all damage should be focus on it until it’s destroyed. The Sangiin’s Thirst will perform heavy attacks, so maintain aggro tank!

The tank needs to hold Grundwulf at ALL TIMES during this fight. He will perform really nasty heavy attacks and cone attacks. He should be faced away from the group. Keep him a bit away from the group to avoid them being hit with AOEs.

He will also cast a dark void bubble that silences anyone inside of it, another reason to keep him away from the group.

You will encounter Hemonculous in this fight as well, for more info on how to deal with them – read the section about Hemonculous at the top.

For some reason the yellow Sangiin mark disappears after a while, this is still under investigation.

Nisaazda will summon a big dark vortex on the ground. Make sure to avoid this, it will take you down really quickly if you stand in it!

Keep taking down the Sangiin’s Thirsts and then resume damage on Nisaazda while the tank holds Grundwulf at a distance and you will win this fight.

The last boss in Moongrave Fane is not too difficult, it’s not harder than any of the previous bosses in this dungeon.

The big dragon will start breathing fire directed at the boss, the boss will attempt to hide behind the big crate. You must push the crate out of the way to let the dragon hit the boss with its fire. If you don’t, the boss will start blasting everyone with red orbs that will wipe the group.

Dark red pillars will appear from underneath the ground, a random player will be connected to the pillar with a chain. Do NOT try to run away to break the chain, it can reach you across the entire fight area.

If you are chained, you have to run to the pillar and stand right next to it, a small green circle will be surrounding the pillar, make sure you stand inside it.

You will get a notification stating “A Sanguinary Shackle is draining your vitality” if you are chained.

You will take heavy damage from the chain and you will be unable to receive any heals while chained, by standing in the green circle you will take less damage. Stand here until the pillar disappears.

You will encounter Hemonculous in this fight as well, for more info on how to deal with them – read the section about Hemonculous at the top.

You can ignore the Hemonculous’ if your group is strong enough, if they cause trouble, make sure to break the shield and deal with them as they come.

I hope you enjoyed this Moongrave Fane dungeon guide! I do my best to explain the mechanics in detail with pictures and maps, if you found anything unclear or if you have a better method – please drop a comment or send a message. 🙂

For more veteran dungeons guides like this one, check out our dungeon guide section!

/Ponty – ESO handle: @pontypants (NA-PC), send me a PM if you are struggling and I’ll try to help you out!