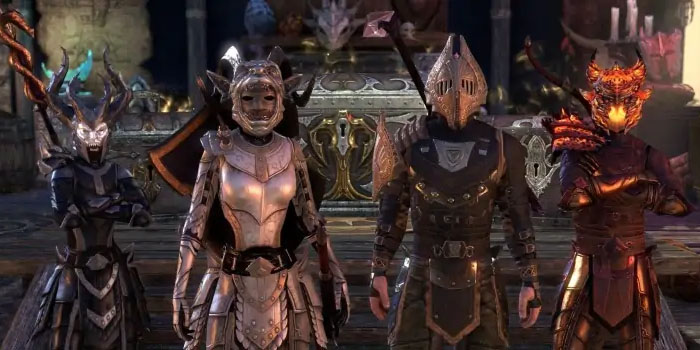 The Undaunted is a Guild in the Elder Scrolls Online which focuses on adventures in Dungeons and Delves. The Undaunted is an official guild ESO and should not be confused with guilds created by players.

How to join the Undaunted

You can join the Undaunted at any point but in order to take the Undaunted pledge and unlock the precious skill line, you need to be at least level 45.

The Undaunted recruiters are located in three places:

See the maps below for their location in each city.

The Undaunted will usually be sitting around a table in a pub, there should be a person with a quest marker there. Accepting this quest will start the quest line to join the Undaunted.

Once you reach level 45 and have taken the Undaunted pledge you can start to carry out daily quests and daily pledges.

To accept pledges you need to talk to the NPCs located in the Undaunted enclaves.

The Undaunted enclaves are located in:

Their location will be marked on your map with the following icon:

This skill line contains some of the most valuable abilities in the game. The passive abilities are super powerful and don’t require you to have an Undaunted ability slotted. They will basically make you stronger with no trade off. I highly recommend you spend some time getting these skills.

This skill line is especially valuable for tanks.

Let’s go over the abilities and which ones to use.

Blood Altar: Very popular skill among tanks as it passively heals you and your allies.

Inner Fire: This is the only ranged taunt ability in the game, it is an essential ability for tanks.

Bone Shield: Another great tank ability, it gives you a shield that absorbs 30% of your max health. Since it is health based, it’s mostly used by tanks as they have a very high base health.

Undaunted Command and Undaunted Mettle are the passive abilities in this skill line. Regardless of your class or role, you should get these. They don’t cost anything to you but they will make you a lot stronger. Win win situation right there.

How to level up you Undaunted skill line

To level up the skill line you need to earn reputation with the Undaunted. There are several ways you can do this. Unfortunately, there are no monsters you can kill which yield reputation making this skill line a bit of a grind.

Let’s look at the different options.

Daily Undaunted quests can be picked up in the Undaunted encampment from Bolgrul. They typically involve you going to a randomly selected delve for each day. Your objective is to defeat the evil within that delve.

Each daily quest will yield: 5 Rep

You can do this to supplement, but this is by far the least efficient way of leveling up the Undaunted skill line as it yields such a low amount of reputation points.

A pledge is a quest which involves you going through a 4 man group dungeon from start to finish. These dungeons can be accessed through the dungeon finder (hotkey: P on PC).

There will be 3 randomly generated pledges per day.

Pledges can be picked up in the Undaunted enclave from 3 different NPCs, Maj al-Ragath, Glirion the Redbeard and Urgarlag Chief-bane.

Each pledge gives you 10 reputation points if the dungeon is completed on normal difficulty.

If you complete the dungeon on Veteran difficulty the pledge will yield 20 reputation points.

You will also be rewarded with keys which can be used to acquire Monster Sets.

Another way to gain reputation is to complete dungeon achievements. You can access and view your list of achievements by pressing J on PC and clicking on the “Achievements” tab.

Every time you do a dungeon for the first time you will earn an achievement for completing it (given that you defeated all bosses and mini bosses in the dungeon, don’t skip anything).

Each dungeon will also have more specific achievements, most of them require you to do the veteran version of the dungeon. Some examples are:

There are other dungeon achievements as well, read through the achievements for the dungeon you would like to do and try to hit some of them.

The fastest way to level up the Undaunted Skill line

By far the fastest way to level up the undaunted skill line is to go for the achievement you get for completing a dungeon for the first time.

Take note of each dungeon that you have completed and just go down the list in the dungeon finder and make sure you complete all dungeons.

Leveling up the Undaunted can be quite tedious but if you just play the game, do dungeons with people, do the pledges, you will eventually build up enough reputation to unlock the entire skill line. Don’t worry too much about it for now 🙂

I hope you found this article useful, if you have any questions I am always happy to help! Either drop a comment or send me a message in game, my user is @Pontypants.